I open skyscanner.com and enter Dublin in the origin box. 10/07/2015. Destination: Everywhere. The list starts loading and towards the top I see Zadar. I’ve been dying to go to Croatia but I’m worried I outstayed my good weather fortune and budget constraints for Europe. Ireland has left me craving sunshine and cheap prices. I look up the weather for Croatia in October. High 60’s/Low 70’s with some rain. Oh well, I think, at least there won’t be many other tourists there. A quick stop on HostelWorld confirms I can more than afford the accommodations. I don’t know anything about Zadar but let’s be honest, who doesn’t want to go someplace called Zadar? I book the flight.

The old town of Zadar is on a peninsula, enclosed by massive walls, free of any kind of vehicles and dominated by Romanesque architecture. When you walk through the main gates you’re greeted by a medievally modern scene: street vendors outside luxury shops and streets lined with outdoor cafes next to 9th century churches. Walk a few minutes in any direction and you’ll end up on the water where tiny boats line the boardwalk and the hills on the distant islands silhouette the horizon. It’s nothing extraordinaryly beautiful, but it’s lovely in its modesty and pulsing with positive energy. 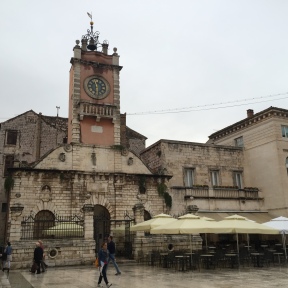 If you make your way around to the westernmost corner of the peninsula you’ll find marble steps leading down into the water. Don’t be fooled. These aren’t just a convenient way to go swimming in the Adriatic. They’re magic. A croatian architect created a sea organ beneath them. The waves wash under you with the ever-changing current of the sea and create music through a series of organ pipes built below the steps . The whale-like melody reaches you through vents carved into the marble. As you watch the water rise and fall, the sea organ plays a symphony of sounds to match.

It is the most hypnotizing, harmonious, soulful, calming sound I have ever heard. I may have even fallen asleep on the steps at 2 a.m. after a couple of Karlovačkos.

When the sun sets, the attention on the seafront shifts to another nature-fueled art installation by the same architect: The Sun Salutation. Directly above the sea organ, a huge glass circle built in to the pavilion covers hundreds of solar powered LED lights that come alive as the sun goes down. The lights flow and dance in a mesmerizingly erratic pattern while the music from the organ plays in the background.

All of this for a place where the sunset requires no assistance to amaze. If I was dolling out superlatives to world cities, Zadar would easily win Best Sunsets. Even without the solar-fueled light show and wave-powered concert that turn it in to the spectacular nightly event it has become. 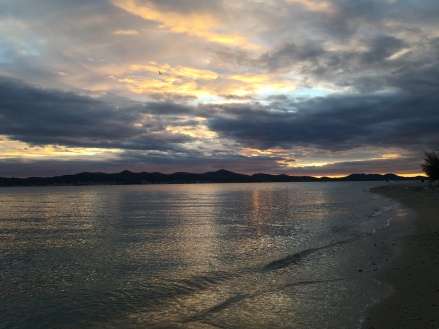 The videos are nice but they can’t convey the feeling that washes over you as you hear the constantly evolving and undulating sounds of the sea. Or watch The Best Sunset in the world (Alfred Hitchcock agrees with me*).  So go to Zadar. Now. and stay at The Hostel, because they’re good people and good people make life better.

*          “Zadar has the most beautiful sunset in the world, more beautiful than the one in Key West, in Florida, applauded at every evening.” -Alfred Hitchcock, 1964